It should come as no surprise to anyone that I love a good musical. There’s something that’s just so fun about musicals. Something so heartfelt about that. I’ll also be one of the first to admit that it’s incredibly difficult to pull off a TV show that’s also a musical. Musical films are a little easier to do, but musical shows seem unable to find a way to balance all of the necessary elements in a way that’s sustainable in the long term. Glee came the closest, but its writing quickly fizzled out after a few seasons and both SMASH and RISE failed to attract a large enough audience to justify their existence. But along comes Zoey’s Extraordinary Playlist, a show that owes a lot to those previous attempts at musical tv shows. Having seen the first four episodes of its first season, it seems that Zoey’s Extraordinary Playlist might have found a way to balance all of the elements of a good musical with the necessary elements of a long-running TV show. But the question still remains if it can find an audience and/or maintain its quality writing and energy in the long term. All of that aside, these first four episodes are pretty darn good, though.

Zoey’s Extraordinary Playlist (created by Austin Winsberg)
If there’s a song in your heart, it will get in her head. Jane Levy stars in this high-concept drama as Zoey Clarke (Jane Levy), a whip-smart computer coder forging her way in San Francisco. After an unusual event, Zoey, who always preferred podcasts over pop songs, suddenly starts to hear the innermost wants, thoughts and desires of the people around her – her family, co-workers and complete strangers – through popular songs. At first, she questions her own sanity, but after getting some guidance from her musically adept neighbor, Mo (Alex Newell), and making a breakthrough with her ailing father (Peter Gallagher), Zoey soon realizes this unwanted curse may just be an incredibly wonderful gift as she connects with the world like never before.

END_OF_DOCUMENT_TOKEN_TO_BE_REPLACED

We’re living in a golden age of the Live TV musical. Every year since 2013, we’ve gotten a new live broadcast of a famous musical. There are usually star-studded, filled to the brim with well-known actors from the stage and screen, and no expense is spared when it comes to the set and costumes. Why, then, are these productions usually met with reactions that range from indifference to hatred? Do we live in a society that finds itself too cynical to enjoy a good old musical? I don’t think so. I think the problem lies less with the audience and more with the creative team and the producers of these productions. In general, each of these productions has had at least one of four problems that result in their less-than-stellar reception: the choice of musical was questionable, the cast wasn’t great, the live audience (or lack thereof), or the camerawork. The teams behind each of these productions had their hearts in the right place, but nearly all of them fell into one of those traps, resulting in audience derision. END_OF_DOCUMENT_TOKEN_TO_BE_REPLACED

It never truly feels like Christmas for me unless there’s some kind of musical event in either the television or film world. Whether it’s a new movie musical for Hollywood or another one of those live musicals on TV (via NBC or FOX), a big part of my Christmas tradition nowadays is a new musical to watch and enjoy right before the big holiday. This year was no exception, bringing two musicals to my eyeballs. FOX just aired A Christmas Story Live! this past weekend (with a book by Robert Cary and Jonathan Tolins and music and lyrics by the songwriting duo Pasek and Paul) and 20th Century Fox is releasing a new movie musical about P.T. Barnum (of Barnum and Bailey Circus fame) directed by Michael Gracey, with a screenplay by Jenny Bicks and Bill Condon and music and lyrics by Pasek and Paul. You might have noticed a theme there with both of this year’s big, new musical offerings: they both feature the music of Benj Pasek and Justin Paul. Fresh off their recent success with Broadway’s Dear Evan Hansen, Pasek and Paul have written original lyrics and music for The Greatest Showman as well as composing a new song for the live telecast of their 2012 Broadway musical A Christmas Story. (Also of note: one of last year’s big musical offerings, La La Land, also featured the lyrics of Pasek and Paul.) So with Pasek and Paul taking over my screens in both of the big new filmed musical offerings, I thought it worthwhile to give my thoughts on the soundtrack for The Greatest Showman (I haven’t seen the movie yet), FOX’s telecast of A Christmas Story Live!, and my general thoughts on the music of Pasek and Paul.  END_OF_DOCUMENT_TOKEN_TO_BE_REPLACED

This past week, the Tony Award-winning musical Matilda: the Musical played the Duke Energy Center for the Performing Arts in Raleigh, NC and the cast and crew filled the room with rebellion and magic. With a book by Dennis Kelly and music and lyrics by comedian Tim Minchin, Matilda the Musical tells the story of Matilda Wormwood (Jaime Maclean, at my performance), a young, smart, book-obsessed girl raised by abusive parents who is sent to a school, run by the evil Ms. Trunchball (Dan Chameroy), and discovers she possesses magical powers. Based on the classic novel by Roald Dahl, Matilda: the Musical aims to remind us all that sometimes we have to be a little bit naughty in life, and that’s okay!  (Note: pictures may not be from the current tour; I had to make do with what I could find. END_OF_DOCUMENT_TOKEN_TO_BE_REPLACED

Disney’s Newsies: The Broadway Musical is a recording of the hit Broadway musical Newsies filmed live at the Pantages Theatre in Hollywood, CA during the last leg of the musical’s national tour. This filmed version features the return of many of the original Broadway cast – including Jeremy Jordan, Kara Lindsay, Ben Fankhauser, Andrew Keenan-Bolger, Kevin Carolan, Mark Aldrich, Tommy Bracco, and John E. Brady – as well as the final national tour cast – including Steve Blanchard, Aisha de Haas, Ethan Steiner, Iain Young, Michael Gorman, Michael Rios, Devin Lewis, and Anthony Norman, among others – combined into one large cast to permanently capture this award-winning musical. As per Fathom Events: Newsies Jack Kelly, a charismatic newsboy, and leader of a ragged band of teenaged ‘newsies,’ who dreams only of a better life far from the hardship of the streets. But when publishing titans Joseph Pulitzer and William Randolph Hearst raise distribution prices at the newsboys’ expense, Jack finds a cause to fight for and rallies newsies from across the city to strike and take a stand for what’s right.  END_OF_DOCUMENT_TOKEN_TO_BE_REPLACED 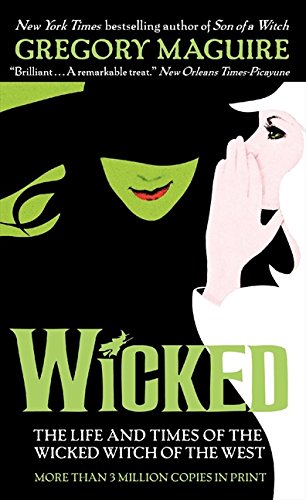 Gave up around part 4. Couldn’t bring myself to finish it. It moves at such a slow pace, and I’ve seen the musical (which, while different, is a much more enjoyable experience). This kind of feels dark just for darkness’ sake. Elphaba isn’t all that likable. Neither is Glinda. Or really anyone. It just never gets going, and I couldn’t pay enough attention to it to finish it. I’ll stick with the musical.