When I heard that Disney was gonna make a live-action version of Winnie-the-Pooh with a grown-up Christopher Robin, I was a bit skeptical. Was that something anybody wanted to see? Didn’t it sound a bit too much like Hook? Would it be good? Then Ewan McGregor was cast as Christopher Robin and I was intrigued. Then the first teaser trailer came out and it looked somewhat generic, but still really cute. Then the second trailer came out and I was totally sold. Every piece of promotional material since then has just made me more and more interested in and excited about the movie. The big question is: is the movie actually good? The short answer is: yeah, it’s alright. Written by Alex Ross Perry, Tom McCarthy, and Allison Schroeder (from a story by Greg Brooker and Mark Steven Johnson) and directed by Marc Foster, Christopher Robin tells the story of a grown-up Christopher Robin (played by Ewan McGregor) as he deals with work and familial problems.

In the heatwarming live action adventure “Disney’s Christopher Robin,” the young boy who loved embarking on adventures in the Hundred Acre Wood with a band of spirited and loveable stuffed animals, has grown up and lost his way. Now it is up to his childhood friends to venture into our world and help Christopher Robin remember the loving and playful boy who is still inside.

END_OF_DOCUMENT_TOKEN_TO_BE_REPLACED 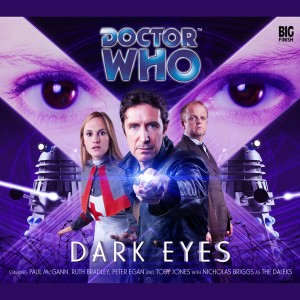 With Doctor Who off the air (I promise the review for the last two episodes of this season will be up soon!), it’s time to explore some of the audio offerings from Big Finish! After finally finishing the Eighth Doctor Adventures, I was finally ready to start Eight’s first series of box sets, Dark Eyes and oh boy am I happy with it. Written and directed by Nicholas Briggs, Dark Eyes follows the Doctor directly after the events of the series 4 finale of The Eighth Doctor Adventures, To The Death. The Doctor (Paul McGann) is looking for hope. But instead, he finds himself on a mission. The Time Lords have uncovered terrifying fragments of an insane plot to destroy the universe. And somehow, at the center of that plot is one, random female in Earth’s history, Molly O’Sullivan. Soon, the Doctor and Molly find themselves thrown headlong into a series of dangerous and terrifying adventures, with the dreaded Daleks never far behind them. (Spoilers ahead!)  END_OF_DOCUMENT_TOKEN_TO_BE_REPLACED