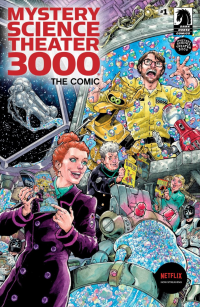 In news that should surprise absolutely no one, Mystery Science Theater 3000 makes for a really funny, really enjoyable, and really good comic. Written by a team of writers that includes series creator Joel Hodgson, Mystery Science Theater 3000: The Comic features Jonah Heston, Crow T. Robot, and Tom Servo being forced into the pages of public domain comics by Kinga Forrester and her lackey, Max. To survive these trips into those comics, Jonah and the ‘bots must riff their way through them.

MST3K as you’ve never seen it before! The riffing hilarity of Mystery Science Theater 3000 comes to comics when Kinga Forrester pairs her Kingachrome Liquid Medium with her latest invention –the Bubbulat-R! Jonah Heston, Crow T. Robot, and Tom Servo find themselves thrust into the 2-D world of public domain comics, with riffing as their only defense! Created for comics by Joel Hodgson! The hit Netflix show has come to comics! Variant cover by longtime MST3K DVD artist Steve Vance! 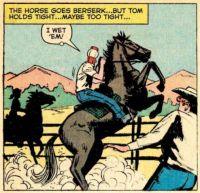 As I said, it turns out that MST3K makes for a really enjoyable comic, but also in a really surprising way. The obvious and easiest way to do an MST3K comic would be to just take the silhouette format used in the show and place it over top of public domain comics and have Jonah and the ‘Bots riff on the comics that way, but that’s not how Joel Hodgson and the rest of the writers do it. Instead, they actually take the characters from the MST3K universe and put them into the stories of these comics (in this issue, Tom Servo stars as Tom Servo: Teen Reporter). On top of that, they have the rest of the characters riff on the events of the comic via these special word balloons that feature a little extra bubble in them to indicate it’s a riff. You don’t know which character is actually saying the riff, only the character in the public domain comic that the riff is being spoken through, but that doesn’t matter. It’s a really clever and inventive way of taking the MST3K concept and making it work as best it can within the confines of the medium of comics. 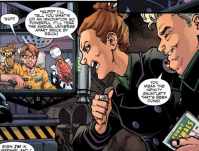 Just like in the TV series, MST3K: The Comic features a host segment, set on the Sattelite of Love (and Moonbase 13). The purpose of this issue’s host segment (illustrated by Todd Nauck) is, mainly, to introduce the concept of this comic series to readers (both those familiar with MST3K and any who might be discovering it for the first time). It’s in this host segment that we find out that Kinga has invented this new technology – called the Bubbulat-R – that can put people inside of comic books and allow them to both live through the events of the comic and riff on them. So, naturally, she puts Jonah and the ‘Bots into a comic and sets them loose. The host segment in this comic really feels like one from the revival of the series. All of the characters’ voices are captured perfectly and Nauck’s illustrations perfectly encapture the look and feel of the series. 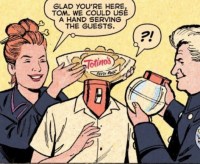 From there, we’re taken into the world of Tom Servo: Teen Reporter. In this twist on a public domain comic (Johnny Jason: Teen Reporter), Tom Servo is cast as a teenaged reporter tasked with investigating the recent botched kidnapping of movie starlet Shelly Marks. His investigation takes him to her ranch where he gets to know her (and gets closer to her) and is forced to attend a party which Kinga crashes and makes him wear a bowl of Totino’s Pizza Rolls on his head (as Totinos is sponsoring this issue of the comic, in-universe). It’s a fun gag and it works within the scene. Of course, the real star of this part of the comic is the riffs. The riffs here are just as good as they are on the TV series. It’s made very clear what lines are actually said by the characters of the comic and what lines are improvised riffs by Jonah and the ‘Bots. They all feel like they’re part of the MST3K universe and most of them land pretty well. It’s just a lot of fun. 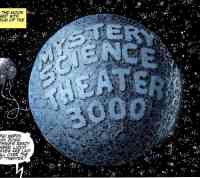 In general, that’s how I felt reading this comic. I just had a lot of fun. It’s really silly, just like the TV series. The artwork is nice, especially Mike Manley’s artwork during the “Tom Servo: Teen Reporter” parts. The writing is on point and feels like an extension of the universe of the TV series. The host segment was clever, well-written, and felt true to the characters and situations present in the TV series. The way that Joel Hodgson and the other writers tweaked the MST3K formula to best work within the medium of comics was really clever, surprising, and enjoyable. This is just a really fun comic. It’s light reading, but still insanely worthwhile. If you’re a fan of the show, check this out. If you’re new to the world of MST3K, still check it out. This might be the thing that hooks you.