I’m going to be blunt. I’m not much of a Superman fan. There’s nothing wrong with the character or anything, his stories just don’t do much for me. That said, there is something about a story that intrigues me. He’s an alien refugee from a war-torn planet who dedicates himself to protecting the Earth. So, I’m open to finding a Superman story I enjoy. That’s partly why I decided to watch Superman: Man of Tomorrow, the newest animated film from DC Comics. The other reason is that Darren Criss, whom I’ve been a fan of since his early Starkid days, was voicing Superman and I was curious to see how that turned out. Well, having seen the film, Superman: Man of Tomorrow is deeply enjoyable. It might even rank among my favorite of the recent DC animated films. (4.5 out of 5 wands.)

NOTE: This review contains mild spoilers. Read at your own risk.

Superman: Man of Tomorrow (written by Tim Sheridan, directed by Chris Palmer
Meet Clark Kent. Sent to Earth as an infant from the dying planet Krypton, he arrived with as many questions as the number of light-years he traveled. Now a young man, he makes his living in Metropolis as an intern at the Daily Planet – alongside reporter Lois Lane – while secretly wielding his alien powers of flight, super-strength and x-ray vision in the battle for good. Follow the fledgling hero as he engages in bloody battles with intergalactic bounty hunter Lobo and before fighting for his life with the alien Parasite. The world will learn about Superman…but first, Superman must save the world!

END_OF_DOCUMENT_TOKEN_TO_BE_REPLACED

Today was DC Fandome, an event designed to rival this year’s Comic-Con at Home. Promising exclusive panels, clips, and reveals, it was the big day for DC to present their upcoming projects to audiences in an attempt to create hype. I love DC Comics; they’re what I grew up on and I will always want the films and television shows to be good. So, I tuned into DC Fandome with a lot of nervous energy and unsure expectations. Comic-Con at Home was a bit disappointing, so I hoped DC Fandome would be better. And, largely, it was, thanks to some great edition from the DC team to make it look better than glorified Zoom calls, some great footage and announcements, and some panels filled with a lot of fan-interactions. On the whole, it was a great event that made me very excited for future DC movies and games. But, the things that everyone’s most interested in are the reveals and trailers. So, let’s break that down.

END_OF_DOCUMENT_TOKEN_TO_BE_REPLACED

I have consistently loved Simon Spurrier’s run on The Dreaming. Of all the Sandman Universe titles, it’s the one that feels the most similar in tone to Neil Gaiman’s original Sandman run. Much like Gaiman, Spurrier has been using his run on the title to muse on the very nature of storytelling. His run has been as much about the art of storytelling as it has been about the Dreaming, and its inhabitants. It’s routinely been one of my favorite titles to return to and when I heard that this volume would be the final one in his run, I was a mixture of sad and excited. It would be sad to see him go, but I was excited to see how he’d wrap up this story he’s been telling since the very first issue. And here we are, at the end. And how is that ending? Well, it’s everything I could’ve hoped for. Spurrier has taken all the threads he’d left dangling and woven them into a wholly satisfying conclusion, ending this story while leaving the door wide open for future creative teams to tell new stories. It’s simply superb. (Mild spoilers follow.)

The Dreaming, Vol. 3: One Magic Moment (written by Simon Spurrier, illustrated by Bilquis Evely (issues 15, 17, 19-20), Marguerite Sauvage (Issues 16, 18) Dani Strips (Issue 13), and Matias Bergara (Issue 14))
As the second year of the Sandman Universe begins, the sentient algorithm known as Wan is now the acknowledged lord of Dream’s realm, and unquestioned ruler of all his subjects. It’s a huge problem that Wan is completely insane, and more than capable of wiping out all life in the Dreaming. What can Abel, the only one who knows Wan’s secret, do about it? And what must he do to poor Matthew the Raven to put his plan into action? Collects The Dreaming #13-20.

END_OF_DOCUMENT_TOKEN_TO_BE_REPLACED 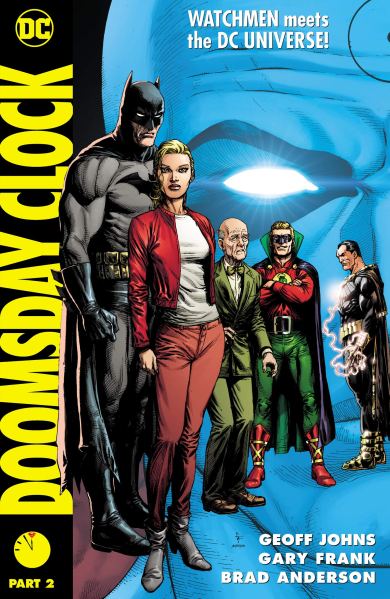 I really wish Doomsday Clock was better than it is. I love Alan Moore and Dave Gibbons’ Watchmen and I really enjoy the DC Universe; I even thought much of the lead up to this series was very good – or, at least, intriguing. But then the actual series came out and it was plagued by so many delays in its publication that it genuinely became difficult to follow the story as it went on. Unfortunately, rereading the whole series upon its completion didn’t really make it much easier to follow. But, I suppose, that’s in line with the original Watchmen graphic novel. (This review covers all twelve issues of Doomsday Clock and may contain mild spoilers.)

Doomsday Clock (written by Geoff Johns, illustrated by Gary Frank)
Seven years after the events of Watchmen, Adrian Veidt has been exposed as the murderer of millions. Now a fugitive, he has come up with a new plan to redeem himself in the eyes of the world. The first step? Finding Dr. Manhattan. Alongside a new Rorschach and the never-before-seen Mime and Marionette, he follows Manhattan’s trail to the DC Universe, which is on the brink of collapse as international tensions push the “doomsday clock” ever closer to midnight. Is this all Dr. Manhattan’s doing?

Spinning out of Watchmen, DC Universe: Rebirth,  and Batman/The Flash: The Button, Doomsday Clock rewrites the past, present, and future of the DC Universe.

END_OF_DOCUMENT_TOKEN_TO_BE_REPLACED 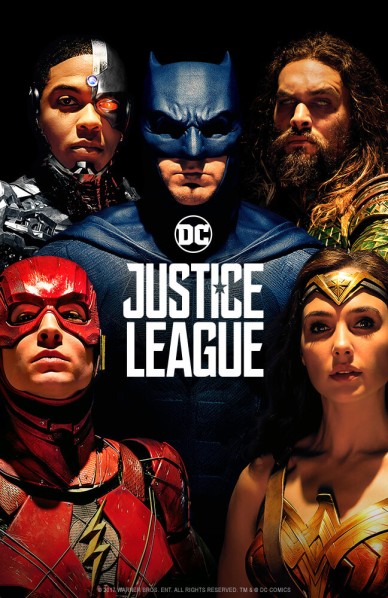 Man, I desperately wanted to like this. I will go to my grave defending Batman v Superman (particularly the Ultimate Edition, where the story actually made sense), but Justice League is, unfortunately, a bit of a mess. A fairly enjoyable – at times – mess, but a mess, nonetheless, and I’m not sure whose fault it is. Directed by Zack Snyder (with substantial reshoots and editing supervised by Joss Whedon) and written by Chris Terrio and Joss Whedon, Justice League is the DCEU’s equivalent of 2012’s The Avengers (also directed by Whedon). It brings the mightiest DC superheroes – Batman (Ben Affleck), Wonder Woman (Gal Gadot), The Flash (Ezra Miller), Aquaman (Jason Momoa), Cyborg (Ray Fisher), and Superman (Henry Cavill) – together for the first time as they team up to defend the earth from an intergalactic – and multi-dimensional? – threat: Steppenwolf (Ciarán Hinds). (Mild spoilers ahead)  END_OF_DOCUMENT_TOKEN_TO_BE_REPLACED

Over the past month, DC Comics has been publishing a crossover between Tom King’s Batman run and Joshua Williamson’s The Flash entitled The Button. This crossover picks up from where the DC Rebirth One-Shot left off, with Batman and the Flash discovering the Comedian’s (from Alan Moore’s Watchmen) smiley-face button stuck in the wall of the Batcave. The crossover follows Batman and the Flash as they try to track down the source of the radiation being emitted by the button while facing off against a series of personal and emotional obstacles thrown their way, seemingly on purpose.

First off, I think it’s important to note that I have not been regularly following either of these comics. I read the first issue or two of Tom King’s Batman run, and it was enjoyable enough; I just got too busy and caught up with life to regularly read them and I have never really read any of the Flash’s solo titles. That being said, this crossover seems to stand apart from whatever ongoing storylines have been going on in the individual titles. As long as you’ve read the DC Rebirth One-Shot, you should be good to go with reading this crossover.  END_OF_DOCUMENT_TOKEN_TO_BE_REPLACED