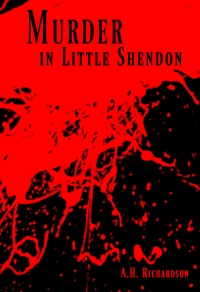 How does a small English town react after a murder is committed in their midst? A. H. Richardson’s Murder in Little Shendon seeks to explore just that. Being the first book in The Hazlitt/Brandon series of murder-mystery novels, Murder in Little Shendon is a thriller murder mystery which takes place in a quaint little village in England after World War Two.

Picture, if you will, a picturesque village called Little Shendon, suddenly caught up in dealing with a murder of one of its citizens — not a particularly well-liked one at that. Which makes it all the more intriguing because the list of suspects becomes very long. This tantalizing tale unfolds with twists and turns to find out whodunit to Mr. Bartholomew Fynche, the murdered shopkeeper. Fear grips the community as the investigation slowly progresses. Everyone is interviewed; everyone is suspect! Uncertainty, wariness, and terror reign as neighbors watch neighbors to discover the evil that permeates their upturned lives. No one feels safe in this charming little village. Who is the murderer? And why was this strange uncivil man dispatched in such a seemingly civil community?

END_OF_DOCUMENT_TOKEN_TO_BE_REPLACED 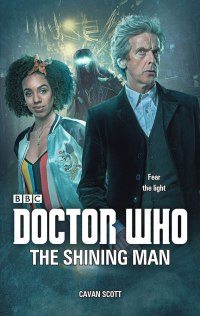 So, I finally managed to finish a Doctor Who book that didn’t involve the War Doctor. And I enjoyed the heck out of it! Doctor Who: The Shining Man is one of the three most recent Doctor Who novels published by the BBC recently. It is written by Cavan Scott and involves the Doctor and Bill investigating strange events that have been happening in a small British town.

The Shining Men are everywhere. You spot them out of the corner of your eye. Abnormally tall, with long lank hair, blank faces, and blazing eyes. If they catch you, they’ll drag you away to who knows where. No one is safe. They’re on every street corner. Waiting. Watching. Shining bright. Of course, it’s a hoax. It has to be, right? It started as a joke, a prank for Halloween. Then it went viral. Idiots dressing up as monsters. Giving folk a scare. Silly masks and fright wigs. No one gets hurt. Because bogeymen aren’t real. Until people start going missing and lights burn in the darkness. Burning like eyes. But help is on its way, in the form of a strange man called the Doctor and his friend, Bill. The Doctor will keep us safe. The Doctor will stop the monsters. Unless the monsters stop the Doctor first… (Courtesy of the BBC summary)