American Gods continues its second season with another very good episode. While last week’s episode moved the plot along at a pretty speedy pace, this week’s episode slowed things down a bit more with a more introspective episode, filled to the brim with conversations about religion and faith, as well as renewal. Like I said, it was a pretty good episode. (There will be spoilers ahead!)

I think the thing I like the most about the way season 2 of American Gods has changed the format of the show is how it’s allowed the show to focus on all of the characters in a more even way. Each week, the show seems to focus on different sets of characters and that allows the audience a chance to get to know each of the characters a bit better than they otherwise might have had the show continued to primarily be told from Shadow’s (or Laura’s) point of view. In this episode, the plot is split pretty evenly between three different plot threads. The first of these begins with a pretty lengthy flashback right at the top of the episode. Fans who have been complaining about a lack of the “Coming to America” vignettes that were prevalent throughout season one should be fairly happy with the way this episode begins. While it’s not exactly the same as the “Coming to America” vignettes from season one, it still tells an origin story of a god – in this case, it’s Tech Boy’s origin. The episode opens with his first follower as a child, growing to love technology, and eventually becoming wholly devoted to it – appearing to ultimately summon this current incarnation of Tech Boy into existence. 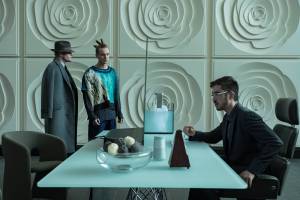 The thread continues through the episode as Tech Boy is tasked by an extremely angry Mr. World to find some kind of replacement for Argus – since Tech Boy allowed Wednesday and Laura to kill Argus in the previous episode. This leads Tech Boy to his “first worshipper” now a CEO at an unnamed tech company. There, Tech Boy proposes some new kind of surveillance system utilizing the technology inside cell phones – the system doesn’t really make a whole lot of sense, but you can handwave it away with “this show is literally about gods”. Mr. World, as it turns out, is actually there with Tech Boy, using his failed pitch as an excuse to “retire” Tech Boy. It’s here where the episode actually makes you feel something close to sympathy for Tech Boy. Earlier in the episode, Tech Boy and New Media (Kahyun Kim) have a conversation about what it’s like for a God to “die” and be “reborn” and that’s a theme that continues through the episode as New Media taunts Tech Boy for being scared of Mr. World and Mr. World goes through with his plan to kill and reboot Tech Boy. So, when Tech Boy is captured by Mr. World towards the end of the episode, it is genuinely a bit sad. Tech Boy is a deeply unlikable character, but he’s one of those characters that you just love to hate, so it’s sad to see him get rebooted. Though, I’m sure this isn’t the end of Bruce Langley in the role. It’s just time for an upgrade, I suppose. Unless Mr. World intends to use New Media as a replacement for both Media and Tech Boy…

Another huge chunk of the episode is spent at Mr. Ibis’ funeral house where both Anansi and Bilquis arrive. Anansi is pretty heated, ready to wage war against the New Gods for the heart of America while Mr. Ibis and Bilquis are a bit more hesitant. Bilquis is still trying to figure out just where she fits in within the greater context of this war while Mr. Ibis is, in general, not fond of fighting. This leads to the three of them having several pretty in-depth, interesting conversations about their history in America, the history of the people who worship them, and what their values are in general. Scenes and plotlines like these are some of the best parts about this new format for the show. Last season, we hardly got to see multiple gods on screen, having conversations with each other that didn’t somehow also involve Shadow, but here, we get a solid third of the episode devoted to these three gods just talking amongst themselves about issues that plague them. Orlando Jones, naturally, has some pretty good speeches in this episode, but would you expect any less at this point? Demore Barnes and Yetide Badaki both go toe-to-toe with them and having all three of them on screen at the same time just makes me very happy.

The final subplot of the episode revolves around Wednesday and Shadow’s quest to try to convince the Bookkeeper, aka the god of Money (William Sanderson), to join the Old Gods’ cause and not the New Gods’. But before we get to that meeting, we first find Shadow in bed at Mr. Ibis’ funeral home, having a very interesting dream. Fans of the book will immediately recognize it as the sex scene between Shadow and the goddess Bast (Sana Asad) and I am so glad that this scene was retained for the show. It’s presented in the typical manner that most dream sequences in American Gods are presented in, and, of course, when Shadow wakes up, he has no idea whether what he experienced was real or not. He does, however, feel better than he’s felt in a long time and, with his wounds healed, he is obliged to join Mr. Wednesday in his trip to St. Louis. Once in St. Louis, the pair reunite with Mama-Ji (Sakina Jaffrey) who is always a joy to see in this show. She doesn’t have much to do in this episode, aside from a brief scene reminiscing with Mr. Wednesday about wars of yesteryear, but it’s still nice to see her. Shadow continues trying to get Mr. Wednesday to tell him just why he’s so important, prompting Wednesday to deliver a pretty scathing monologue suggesting that Shadow’s only importance is that he was a man who had lost everything and meant nothing to anyone. It’s surprisingly brutal, even from Mr. Wednesday, but you can see it hurts Shadow nonetheless, though I don’t think Shadow really buys it. Eventually, Mr. World arrives and he and Wednesday attempt to broker a deal with the Bookkeeper – to no avail, of course, as money has no allegiance. I really dig the scenes where Mr. World and Mr. Wednesday interact with each other. It’s clear the two have some kind of complicated past – and book readers will likely know what that is, assuming the TV series doesn’t change that aspect of the story – and Crispin Glover and Ian McShane play off of each other so wonderfully that it’s a genuine delight when they share scenes. It’s hard not to feel like this whole trip was a bit of a diversion since neither side ends up getting the Bookkeeper, but I suppose that’s how it is in the leadup to a war and I kinda dig that the show is really showing the buildup to this war in a way the novel didn’t really accomplish. 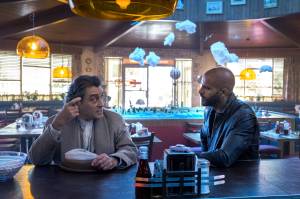 All in all, The Greatest Story Ever Told is another great episode of American Gods. While less happened this week in terms of overall plot progression, there was still a lot of great stuff to behold. The character moments – particularly those from Bruce Langley’s Tech Boy, Orlando Jones’ Mr. Nancy, Demore Barnes’ Mr. Ibis, and Yetide Badaki’s Bilquis – are what really carry the episode. Curiously, contrary to what the synopsis provided for the episode suggests, neither Laura nor Mad Sweeney make an appearance in this episode at all – unless there was either a) a scene missing from the screener provided to the press or b) a blink-and-you-miss-it scene. I’m curious to see how they get reunited in the next episode and I’m very excited, in general, to see how things continue to progress. We’re at the halfway point of this season, now, and I have to say that I am pretty happy with what we’ve gotten so far. Sure, there have been some bumps along the way, but this episode continues to show that this show does have a vision for where it’s going – and it’s a very, very interesting vision.